Deep Mapping – the mapping, or essaying, of places

What is a deep map? This week’s topic is puzzling and intentionally so. The deep map tends to be an interface that shows complexities found in between the poetic and the “real” with the intention to shed light upon the simultaneous existence of multilayered subjectivities that gesture towards the past as well as the present. The deep map, through its archaeological investigations in both the media, the spatial and temporal becomes a symbol of elastic time. One where the recognition of one “actant” sheds light on a new reality. Deep mappers recognize the power and violence in bringing one perspective to the forefront and instead attempts to present a myriad of layers.

Although time is central to the deep map Ian Biggs argues for its liberation from singular disciplines (2010). Hence for him a deep map is many things and does not need to check certain boxes to come into being. An example of a deep map that attempts to take on a hybrid perspective is “On Broadway.” A map produced by Daniel Goddemeyer, Moritz Stefaner, Dominikus Baur and Lev Manovich who argue that “the project proposes a new visual metaphor for thinking about the city: a vertical stack of image and data layers.” The Map is inspired by pop-artist Ed Ruscha’s “Every Building on the Sunset Strip” which was made during the early 60s when Ruscha attached a camera to his car and snapped consecutive photos along Sunset Boulevard. Manovich and his team use a similar practice along Broadway, the “spine” of NYC. The available data on the interactive map is: taxi drop offs, medium income, Instagram feed, check ins and tweets. Manovich claims that through using these sources of data he was able to present an affluent divide; in the richer areas, there were more taxi drop offs, more Instagram posts etc. The data also presented attraction to landmarks, where parks and sites of spectacles were commonly documented by tourists.

To use Instagram as an archaeological site of investigation is interesting. However, there are certain elements of the presentation of information and use of methodology that are worth paying attention to. First of all, the structure of Instagram hashtags. How does Instagram create its location feed? What is the algorithm behind that? Does Instagram predict which images would be popular? How does that affect the “unbiasedness” of using Instagram as a source of data? Further, the imagery of the Instagram feed as well as the interface of On Broadway refers to a collage where each image is independent and not necessarily interwoven.  The collections of images do not tell a story but demand the user to interact with them themselves. This could be argued to be intentional so not to predetermine the outcome but it also allows for a presentation which suggests objectified “data.” Where the “process” of Broadway has been broken down to measurable and objectified units.

Hence in the construction of the deep map it can be worth-while to apply how anthropologists have criticized Clifford Geertz’s ability to claim thick description. Anthropologists have questioned Geertz’ statement of being able to find objective semiotics within culture and have rather attempted to return the gaze to shed light on the biases that emerges from claiming thick description. Ethnography, “is the source of thick description which reveals stratified hierarchies of meaningful structures” (Geertz, 1973:7) and assumes the ethnographer’s ability to find public totality through the perception of minute difference. The subtle differences can be extracted as the codes of the culture, also known as semiotics. Yet, the outcome of the labor of the attentive observer becomes a fully formed and packaged “ethnography” detached from “subjectivity.” Similar to how ethnography has its connotations, the framework of the map speaks to “collaging,” which has a spatial implication and a history. Each image stays intact, allowing the user to recognize each object. By presenting images as layered in this regard the deep map becomes analogous to the anthropologist’s quest for organizing and smoothing out tensions and complications embedded in their thick fieldwork notes into a streamlined, visually pleasing interface. 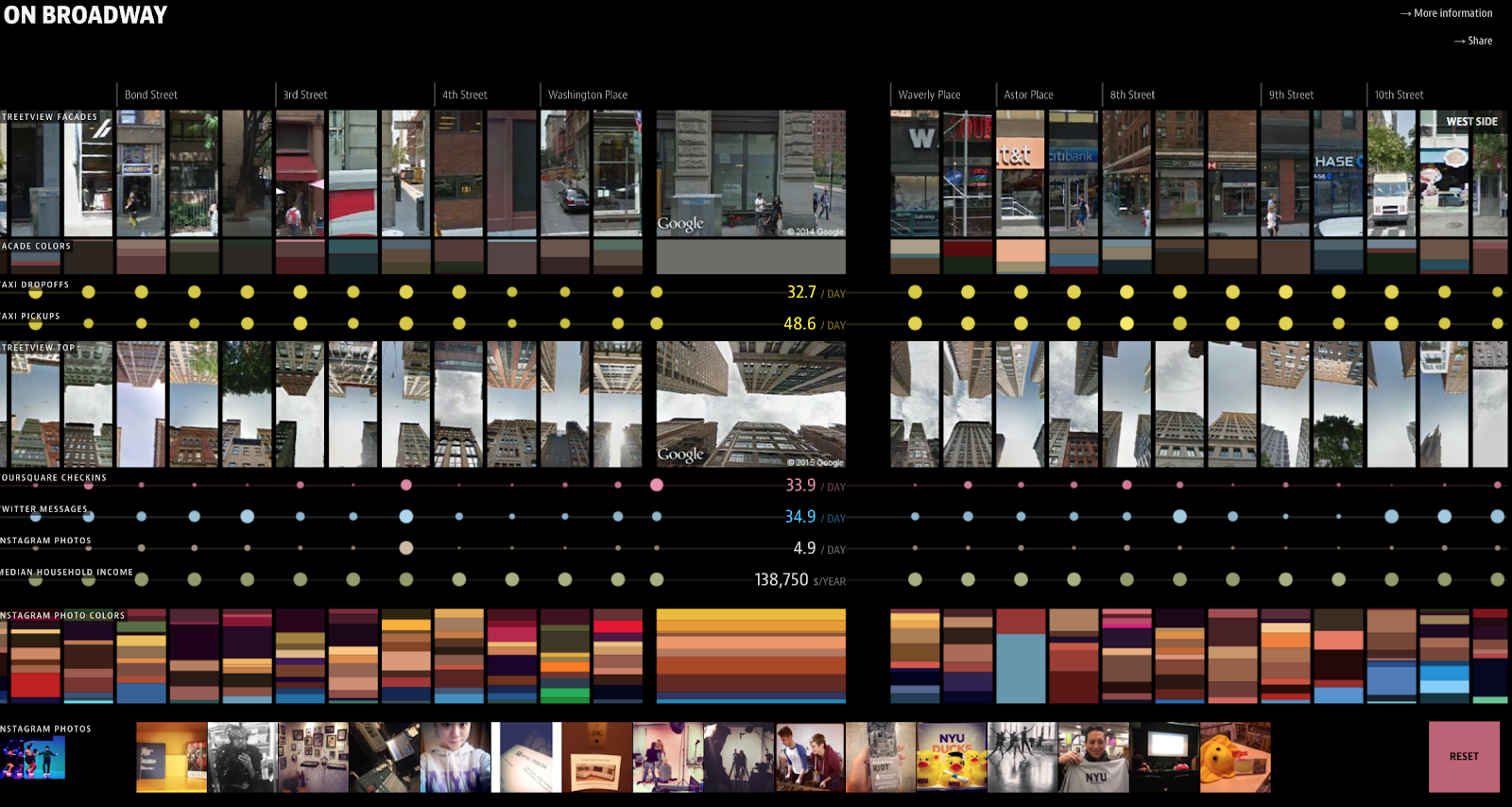 How, then, do we ensure that the aesthetics of the deep map don’t overshadow the continuation of pre-existing power structures? Indeed, sometimes the innovative, the glossy, the new, interdisciplinary, that wave, which we all want to be part of, needs to be criticized in the same manner as the old and unglamorized. The deep map and especially Manovich’s is not as exaggeratedly new as suggested especially as it relies on already visible data. So how can we go beyond the glossy interface of overlaying images whose presentation rather than content suggests a new form of thinking? Further, how could Manovich et al attempt to map that which is not already visible?

Asking these questions allows us as mappers to recognize the value of the fictive element of map making – fictive, both in narration and presentation – and so I ask what knowledges emerge from returning to the analogue map? In my map, which aims to highlight seemingly invisible actors in Prospect Park, I draw inspiration from Karen Lutsky and Sean Burkholder, who ask us to not “extract meaning but to ask questions?” So to “probe the landscape” of Prospect Park. What can you see and find if someone hints towards something else? In my map, I build upon the work of Jane Bennet (2010), who urges us to recognize matter as vibrant. I ask how a deep map can go beyond the static, although complex and layered, interface. Hence my prototype map is a map that aims to suggest the richness of the soil in Prospect Park by speculatively mapping the mycelium network and the interactions that exist between mycelium, soil and trees. In the map, I am not attempting to prove for example the amount of sugar the tree exchanges for the mycelium’s nutrients, but to shed light on the dynamics.  Through vibrating sensors placed along the soil of my map the vibrations are meant to gesture towards a dynamic ground, one where our ecology is symbiotically shared with other living beings. 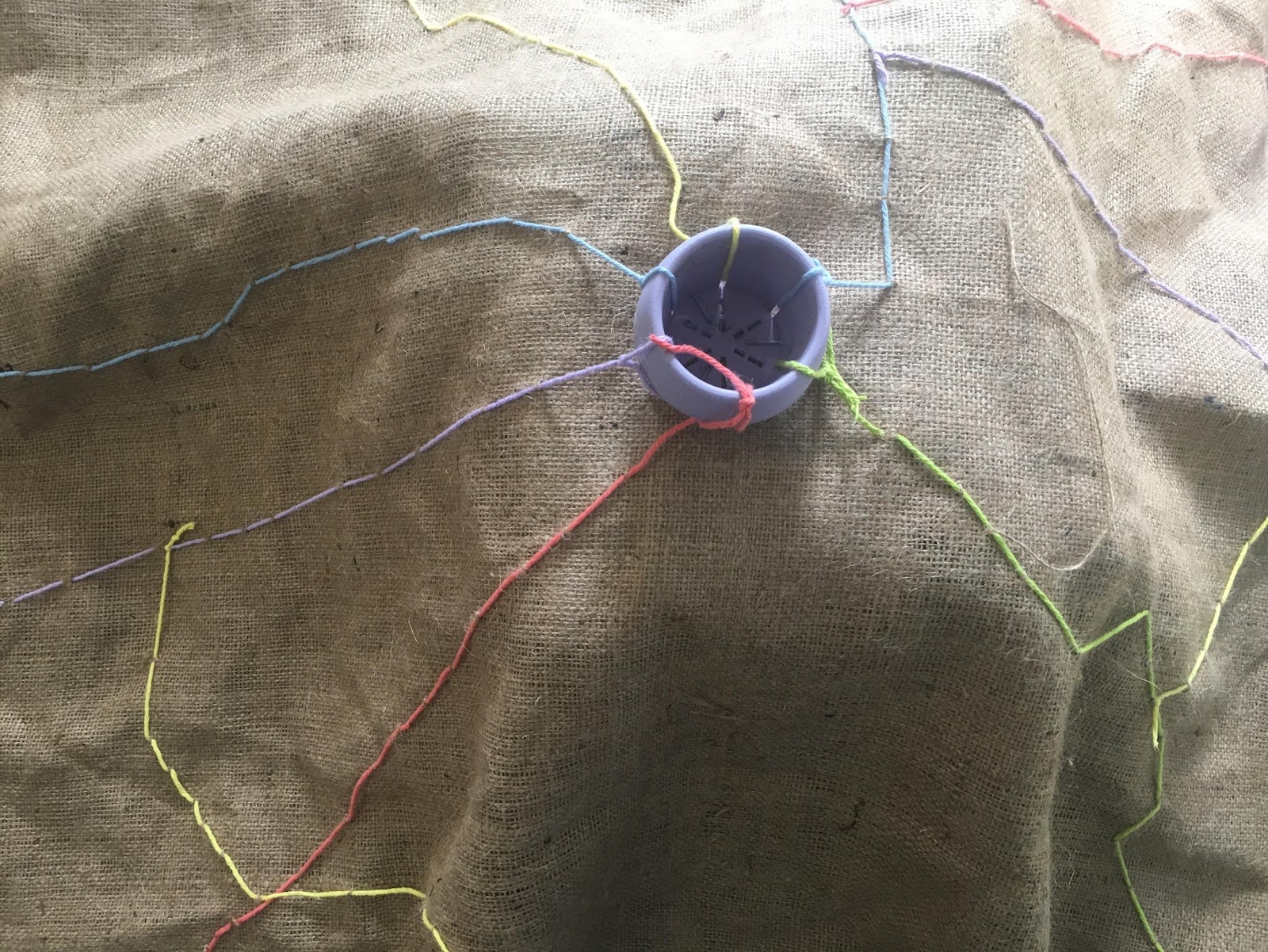 Biggs Ian, 2010, “Deep Mapping as an Essaying of Place,” http://www.iainbiggs.co.uk/text-deep-mapping-as-an-essaying-of-place/

For today’s lab, we’ll break everyone into groups of three(-ish); ask you to review the following list of choices and choose one map to analyze; then give you roughly a half-hour to explore your chosen map, and perhaps do a little background research to find out how it was created, by whom, what their intentions were, how it’s been received by its intended audiences/user groups, etc. Ultimately, you’ll apply some of the evaluative criteria we discussed in the first half of class (you can access the presentation here). We’ll then reconvene and share what we’ve discovered.

Here are your eight options:

A Bear’s Eye-View of Yellowstone: a map-embedded multimedia presentation follows one bear, with a camera around its neck, through Yellowstone. How does a bear experience the world? How does it situate itself within space? The Center for Spatial Research’s Citi Bike Rebalancing Study: studying Citi Bike use patterns and redistribution options in the hopes of evening out the bike-share geography. “We believe in a world where all seven billion of us can belong anywhere, #OneLessStranger at a time.” Ahhhh. Touching. Explore AirBNB’s “A World of Belonging” map, including the introductory extravaganza. Columbia’s Center for Spatial Research has an interactive called We Can that features the people who collect cans in the city and follows each them through their daily journeys. With all recent legislation about gerrymandering, stats website FiveThirtyEight has made available a tool called The Atlas of Redistricting that “fixes” all those crazy Congressional districts… and there’s a fix for everyone. The Guardian was covering this summer’s Thailand cave rescue from the breaking of the story to the boys’ eventual rescue, and they used different maps and representations alongside their text to tell the world about it. The construction of the Dakota Access Pipeline and the ensuing protests were in the news two years ago, as the new underground crude oil pipe posed (and now that it’s up and running, continues to pose) a threat to the culturally significant indigenous lands it crosses through, as well as to the quality of the water supply in four states. This New York Times story covers the pipeline tip to tip.

For another perspective, contrast the journalists’ map above with the one published on a website owned by Energy Transfer Partners, the builders of the pipeline. Taking data from the UN Human Rights Commission, this map from The Refugee Project shows flows of refugees from country to country over time. Read the story before you get to the map, where each country gets its own treatment accessible as a text drop-down on the left.